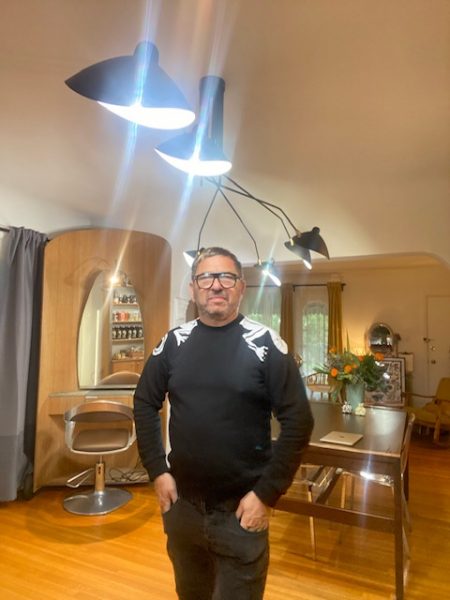 “I began by playing with my cousins’ hair around the age of 7, before working for a local hairdresser in Istanbul.” says Agop Arnaud Ozharun.

When he started working in 1964, the young Turkish man had one idea in mind: to go to Paris. A fashion aficionado, he came to the French capital shortly before the 1970s, at the age of 16.

In 1985, after an initial experience in a small hair salon, “where we still heated up water using coal”, he rented his first salon in the suburb of Meudon, showing determination.

This 25 m2 space attracted a Parisian clientele. It rapidly became the trendy “go-to” spot, thanks to a new concept and new brand that had just reached the European market: Sebastian.

At the end of the 1990s, he found a venue fully in line with his ambitions in the Marais district of Paris. “It was a former candy-making factory, then a lithograph gallery.

I immediately fell in love with it. I asked an American friend of mine, who is a carpenter, to design pieces of furniture on wheels. I then created a new concept, combining a hair salon and contemporary art gallery.”

It was a success! It rapidly became the “place to be”, with a growing team of twenty staff members and two makeup artists. In 1987, the ambassador for Sebastian set out on a new adventure to discover California.

As France became too small, his obsession with the American dream grew. In 2014, he sold his salon to Patrick Ahmed and Serge Janin. When he arrived in Los Angeles, he got his first hands-on experience of the demanding American market.

A Francophile, he continued to travel back and forth between Paris and Los Angeles.

He would cut and style the hair of certain customers in Paris, whom he had known since the 1970s, while building a reputation with his American clientele. “Parisians prefer shorter hair, whereas Californians would rather keep their hair longer.”

His American customers were won over by his French style. After opening immense salons (one inside a former cinema with a plant wall and spa), he returned to a more intimate atmosphere in a house with a yard and swimming pool, near the Lacma museum.

His customers followed… “They enjoy the subtle tones of my blond hair colors and highlights. I don’t propose hype styles. My clientele tends to prefer more timeless styles, created with French brands, such as Végétalement Provence.” What are his projects? “I will finally return to Paris. I also dream about going to Norway.

I’ve always loved to travel, as it is a very mind-opening experience!”