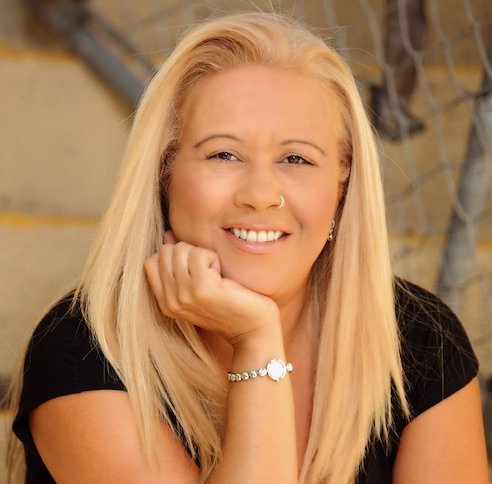 Celebrity nail tech Tracey Sutter has personally seen the manicure evolve from the 1980’s Flashdance fabulous to today’s arrays of gorgeous glam naturals and incredible nail art. She specializes in natural nails, pedicures, gel nails and nail art ­– which she does all splendidly.

A third generation Californian, who grew up in the San Fernando Valley, Tracey had been a serious nail biter as a child. Finally in 1981, as a young mother of two she got her first set of acrylics done and .. víola! Inspiration hit.

She watched closely and guessed correctly that she could teach herself the technique. She went and purchased all supplies she needed and got busy. Within about six months Tracey has built herself a clientele at home. In 1984, she earned her professional certification at West Valley Occupational Center in manicuring. And because she had been the top student there she immediately secured a job in a salon.

Tracey’s career skyrocketed when she signed with Cloutier agency in 2000. Since then, Tracey’s career in media-genic manicuring has taken off. She is one of the few manicurists whose work is seen on the big screen as well as red carpets. With 30 feature films under her belt she has also perfected the talons of celebrity clients and musicians such as Kim Kardasian, Neil Young, Britney Spears, Jennifer Garner, Eva Longoria, Reese Witherspoon, Mary J Blige, Jessica Beil, Jennifer Aniston, Justin Timberlake, Hilary Swank, Usher, Kylie and Kendall Jenner, Caitlyn Jenner, Christina Aguilera, Christina Applegate, plus so many more.

Her work has been seen in top tier magazines such as Italian Vogue, Vanity Fair, W Magazine, C Magazine in addition to advertising campaigns.

When it comes to beauty, the warm and engaging Tracey Sutter is the real deal.

Book an appointment with Tracey today!