For beauty, go directly to jail

This beautiful story begins many decades ago, back in the 1930s, when Malibu was nothing more than a strip of sand with the beautiful blue Pacific glistening off the beach. The Chumash, a Native American tribe, who had lived along the coast for thousands of years called it Humilawo, meaning “the surf sounds loudly.” It’s thought that the name “Malibu” is actually the result of many generations altering the pronunciation of the Humilawo, making the Hu silent and rolling the letters and consonants together.

As hard as it is to believe, for those of us who travel the roads of Southern California regularly, Malibu was largely inaccessible before 1929. You could get to it only by driving along unwieldy paths through dangerous canyons. But then, just before 1930, Pacific Coast Highway was built and suddenly, a new world opened up. At that time, Malibu was owned by the family of Frederick Rindge, who had purchased the land in 1891. After he died, his widow was forced to subdivide the land, and in 1926, as homes began to appear, it became known as Malibu Colony. Mrs. Rindge lived in what is now known as the Adamson House and employed 100 people in a small ceramic tile factory. It was ravaged by fire in 1931.

It was such a burgeoning burg that newspaper magnate William Randolph Hearst considered building an estate in the area but in 1936 decided against it. Instead, he sold much of his land to a realtor named Art Jones, who then began to develop the area building the Malibu Inn, the Malibu Trading Company, and the restaurant now known as Moonshadows. An area that was beginning to grow, like any town in the wild west, also needed law enforcement, and so in 1932, construction on a courthouse began.

Originally a single story building, it grew to meet the demands of the expanding town, and soon included a sheriff’s station and a holding cell. The residents of that cell could have included John Dillinger, Bugsy Siegel, and Meyer Lansky. In later years, Charles Manson and his followers could have been housed there as well.

After such a storied history, it’s hard to believe that it ceased to exist, but the courthouse and its jail cell was closed in 1990. But the building got a new lease on life when, in the 21st century, the building was revamped to become individual spaces for rent. 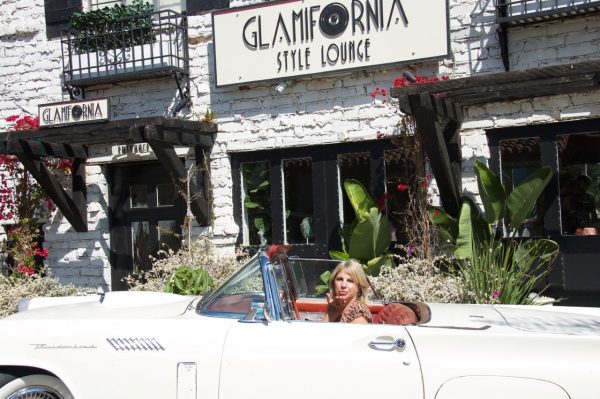 One of those spaces is now filled with beauty because one of those spaces is home to Glamifornia Style Lounge. Terah Tidy opened her eponymous beauty studio in 2015, in the very space that includes the old Malibu jail cell. Now, instead of drab walls and bars on the window, there is light filtering through windows and art everywhere. In a nod to the rich history of the area, there are also surfboards. And on any given day, Malibu beauties of every age sit in our chairs to indulge in hair styles and beauty rituals.

We’ve brought beauty and wellness, art and fashion to “Humilawo,” where we’re part of history, and making history every day.