Surf’s Up! Your Guide to Malibu’s Best Surf Spots

If you heard of the phrase “hang ten” but never had a clue as to what it meant, you’re not alone. This phrase is one of the many popular expressions used by surfing aficionados all over the world. If the ocean is your happy place, then surfing might be the sport for you. Note that there are still ongoing restrictions in place to help keep surfers and beachgoers safe during the pandemic. Popular surf spots are taking the proper precautions to mitigate the spread of COVID-19 by enforcing social distancing and restricting access to public areas with heavy foot traffic. Surf’s Up! Here is Your Guide to Malibu’s Best Surf Spots.

For over 50 years, Malibu has been a surfing mecca of the United States. Cities like Malibu have made themselves synonymous with surfing, and today, it’s even described as a surfer’s paradise. Each year, thousands of surfers from all over the world travel to catch the beautiful Malibu waves. Whether you’re a professional or stepping on a board for the first time, Malibu has plenty of spots to choose from!

When you think of Malibu, sun-kissed skin, sandy beaches and surfboards instantly come to mind and for good reason. Of course, the city’s proximity to Hollywood helped put Malibu on the map as a surfing destination. Don’t be fooled though; surfing has ALWAYS been part of Malibu’s history! In fact, surfing has been a part of Malibu’s rich history since the 1920s. Long before the development of the Pacific Coast Highway, pioneering surfers like Tom Blake and Sam Reid first rode the waves from Santa Monica and up to what today is known as Surfrider Beach. By the 1950s, surfing boomed in Malibu, and Surfrider beach became the surfing hotspot of Southern California. Because of the city’s beautiful year-round weather, it is no wonder why so many surfing fanatics from all over the world pack their bags for Malibu every year! If this destination is still on your surfing bucket list, you will want to add these beaches to your list.

First time on a surfboard? Then County Line is the perfect place to start! Dividing Malibu and Ventura, this surfing spot sits across from the iconic Neptune’s Net restaurant, often featured in popular movies and TV shows like Gossip Girl. This quiet little beach on the edge of Malibu welcomes less-experienced surfers with open arms. Unlike some other locations on our list, County Line is best known for its surf-break that offers calm and gentle waves for those just starting out. At County Line, surfers can ride freely without the fear of a major wipeout! This beach is less populated than other surf spots, making it the perfect destination to build up your skills AND your confidence.

Experienced surfers, STOP SCROLLING! County Line has something for you too! While beginners widely love this surf spot, it is also home to Junior and amateur surf contests. As you head away from the center of the beach and further out, you’ll come face-to-face with more challenging waves that are sure to give you the rush you’re looking for.

Zuma beach has become a popular spot for local surfers wishing to ditch large crowds during peak season. The iconic Zuma beach stretches across three-miles of crisp and clear ocean waters. When it comes to surfing, this beach is often overlooked. Those who’ve been around long enough know exactly where to catch a great wave. If you’re looking to surf Zuma’s massive waves, head over to the Drainpipes, a stretch of beach with some of the most massive waves in all of Southern California! Be careful, though; Zuma’s waves are known for being deceptive. Talk to any local surfer, and they will tell you that waves are always bigger and hollower than they look.

Are you getting ready for a day of surfing with friends? Then head over to Topanga beach for waves that meet everyone’s needs. Over the years, Topanga beach has become a popular surf spot thanks to its wide range of waves that attract surfers from all over the world. It is common knowledge that you can always count on Topanga beach for good waves and a good time! Whether you’re a seasoned veteran or just dipping your toes into the world of surfing, Topanga’s waves range from mild to enormous 10-footers! 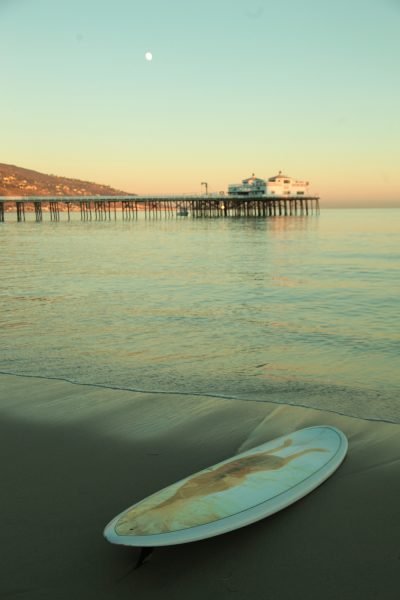 Last, but certainly not least, is the famous Surfrider beach. When we said Hollywood helped popularize Malibu surfing, we meant it! Over the years, some of the biggest surfing films were shot here, so you probably recognize its famous pier. This surfing spot became so popular that in 2010, Surfrider beach became the first World Surfing Reserve, which works to save and protect beloved surfing areas such as this one.

Much like Topanga beach, Surfrider beach offers something for everybody. With three different surfing areas, even the least experienced surfer is bound to catch a good wave. The first point of the beach is excellent for new surfers testing out their luck, but head over to Second Point if you’re up for a bigger challenge. If surfing is second nature to you, Point Three is where you’ll spend most of your time. The outer edges of the beach are where you’ll find the biggest waves. In fact, nearing the end of summer, large swells can carry you from one end of the beach to another!

So, next time you’re ready to hit the Malibu waves, be sure to visit these popular surf spots!